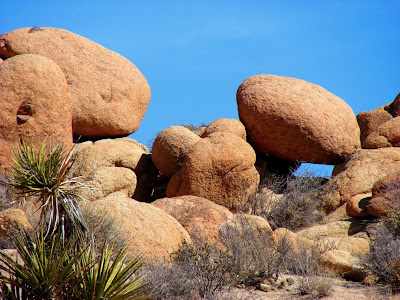 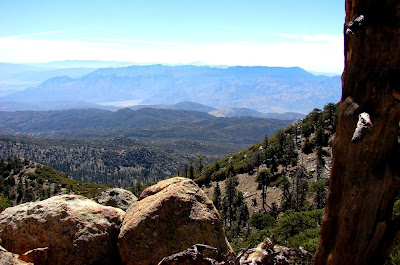 The Coachella Valley is one of the unique geological corners of a unique geological state. The northern extension of the Gulf of California, it is a great place to observe a diverging plate boundary on land. The valley is a deep fault graben that is traversed by the south end of the San Andreas fault and the highly active San Jacinto fault. High mountain ranges, the Little San Bernardino and San Jacinto Mountains, flank the valley. The north slope of San Jacinto Peak is one of the steepest mountain slopes to be found anywhere in the country, dropping from the summit at 10,834 to the floor of the valley at close to sea level. The spectacular mountain and desert country includes lands protected by the establishment of Joshua Tree National Park and San Jacinto National Monument.
The Salton Sea is a strange landscape that resulted originally by an engineering mistake. In 1905, an irrigation canal diversion was overwhelmed by high spring runoff and the Colorado River flowed into the salt flats unimpeded for two years, ultimately producing the biggest lake in California. Lake level is maintained by irrigation runoff, but faces multiple environmental problems due to the high evaporation rates and chemical accumulations.
The Coachella Valley was the site of the Spring 2007 meeting of the Far West Section, hosted by Fullerton College, California State University San Bernardino and the College of the Desert. The guide was edited by Jeanette Frank, Richard Lozinsky and Marc Willis, and includes the following road and trail guides:

You can follow the field trips with the roadguide developed for the event here. Sales of the guidebook support the Far West Section scholarships for earth science students. Check it out!

The photos (by Garry Hayes) include a view of the spheroidally weathered granite boulders near the Mastodon Mine (tour number 1), and the view from the summit of Santa Rosa Peak into the southern unit of San Jacinto National Monument (tour number 4).