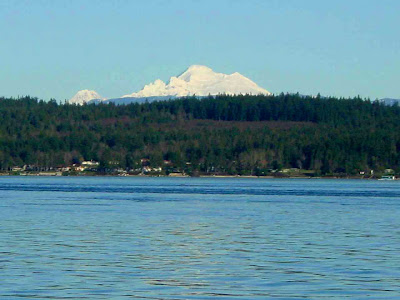 Are you interested in geology field guides for the northwestern United States? You might want to check out a new blog by Dave Tucker at Western Washington University: Northwest Geology Field Trips. It has a wealth of information and some fun looking trips; check it out!
Dave is also the director of the Mount Baker Volcano Research Center, which has a website here. For those who are less familiar with the volcanoes of the Pacific Northwest, Mt. Baker seemed to be on the verge of erupting in 1975-76, and has had a fair amount of activity in late Pleistocene and Holocene time. That's Mt. Baker in the photo above, as seen from Whidbey Island.
Posted by Garry Hayes at 4:40 PM No comments: